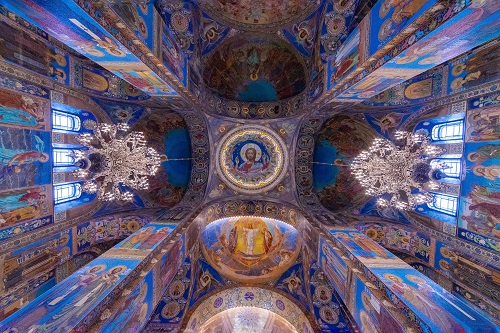 In March this year, I was fortunate enough to go with the History department to St. Petersburg in Russia.
There are many outstanding buildings in the city but my absolute favourite was the Church on Spilled Blood. This breath-taking church is located just off the main shopping street of St Petersburg called Nevsky Prospeckt. 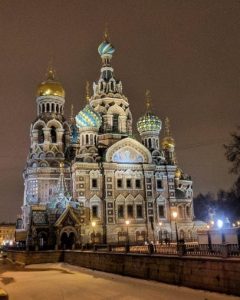 The decision was taken to build this church to commemorate the assassination of Tsar Alexander II in 1881. The Tsar had introduced many new ideas and practices into Russia at the time, the main one of which was when, in 1861, he liberated all Russian peasants from their masters across Russia, effectively abolishing slavery in the country. He also abandoned corporal punishment and promoted self-local government. Additionally, He started many new military and judicial reforms, which were met with some unpopularity, increasingly among nationalists. We know that Alexander survived at least one assassination attempt during his life in 1866, and after this day he took a more reactionary stance. Throughout his life, Alexander knew that he was increasingly at risk of assassination and was eventually killed whilst riding in his carriage when two assailants threw an explosive underneath. The tsar was mortally injured, and his blood spilled out over the cobblestones.
These cobblestones are now central to the church, with a small fenced off area under the altar where Alexander’s blood was said to have been spilled. Alexander was taken back to the Winter Palace, where he died of his injuries amongst his family. His assailants were members of a renowned terrorist organisation called ‘The People’s Will’. The assassins were later hanged; however, the organisation later advocated the Bolshevik revolution led by Lenin in 1917, Alexander’s son and grandson Alexander and Nicholas were present at the time of his killing and historians believe that this may have been why – when it came to their time to rule Russia – they suppressed revolutionaries so brutally; they were both terrified of a similar fate befalling them. 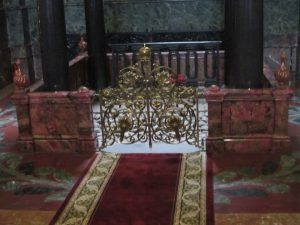 In commemoration to the murdered Tsar, the people decided to build a church on the site of his killing. So, between the years 1883 and 1907, the church was constructed. The church was almost entirely funded by the Imperial family, who were mourning their murdered leader.

One of the striking features of the church’s interior is the ornately detailed mosaics and paintings. These beautiful and colorful images cover the ceiling of the church and really make the church feel atmospheric. The exterior of the church is decorated with iconic ‘Pseudo-Russian style’ domes on top. This is like St Basil’s Cathedral in Moscow, however this style of architecture is normally associated with Moscow rather than St Petersburg which makes the Church on Spilled Blood unique in the city. Another amazing legend about this Cathedral is that it was saved from demolition by the outbreak of the second World War as bomb technicians were urgently needed to fight in the war.