Pupils introduced to the world of Film, TV and Media

King Edward’s Witley pupils learned all about working in the world of film and TV when Media Guru Bruce Devlin visited the School to deliver a presentation as part of the 3rd Form careers programme.

During his talk in the King Edward’s Lecture Theatre, Mr Devlin, who is also Standards VP of the Society of Motion Picture and Television Engineers (SMPTE), raised the issue about the shortage of students with both Arts and Science qualifications entering the industry. He predicts the current skill shortage will be heightened by the use of artificial intelligence in the coming years and stressed the need – and the opportunities, for high-tech, creative people within the media technology sector. 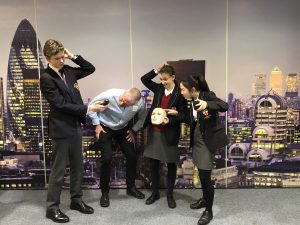 Mr Devlin, who lives locally in Chiddingfold, where he is a key part of the community, outlined to the excited pupils his plans to recruit interns in the next few years to work with him and learn the business. Interns will be taken on for a period of two years.

Also keen to recruit more women into the creative-technology sector, Mr Devlin ran a quiz for the pupil and parent audience pointing out that what we see on screen and what is real can be two very different things.  Following this, Mr Devlin opened up a Q&A session to the packed room to answer a deluge of questions from both pupils and parents.

King Edward’s Witley Head, Mrs Joanna Wright said, “Having renowned professionals visit the School to introduce our pupils to the opportunities that exist in their industry and the associated pathway to success, is a key strand of our careers programme.  It was wonderful to hear Mr Devlin talk so passionately about the media technology world and I’m sure he has inspired many of our pupils to seriously consider this growth sector. It was particularly empowering for our girls who, 20 years or so ago, may have been directed away from such positions, but who today, are actively encouraged to pursue their dreams in any technology related field.”