This year’s Ski Trip was a roaring success with a group of 30 pupils and staff returning to the glamorous resort of Madonna Di Campiglio. Madonna, as it is known, is a regular ski resort for the rich and famous, most notably Michael Schumacher who has a black slope named after him there. 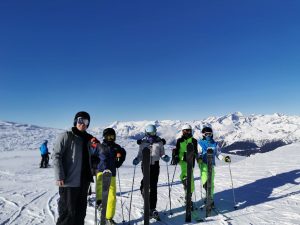 We set off on a bus trip to Stansted Airport where, upon departure from King Edward’s, we learned the School was being inspected that day – a welcome relief for the teachers on the bus. We had a very relaxing flight to Milan Bergamo before our bus transfer to Madonna. The skiing began the following morning with two instructors, who had been there the previous year, being on hand to help. This brought back many memories and slogans that were used throughout the week such as ‘Why John why?’ for whenever someone, particularly Lower Sixth pupil Joel skied backwards downhill and the ever used ‘You now go straight down!’ for the more speed inclined members of the group such as 2nd Form Henry and Zac.

The advanced group with Mrs Meyer pushed themselves hard in the snow park and off-piste, attempting many jumps and difficult manoeuvres. Misha, Egor and Alex being some of the most adventurous in this group. The beginners under Mr Gardner showed great improvement with 1st Formers Oli and Harry completing black slopes in their first week. The intermediates found it very challenging with Mrs Harris-Jones and me. Our main success story was 5th Form pupil Quinn who completed some of the most difficult runs in the resort on his first week skiing. There are numerous videos on YouTube which are being shared of some of the best, and not so best, moments of our skiing! 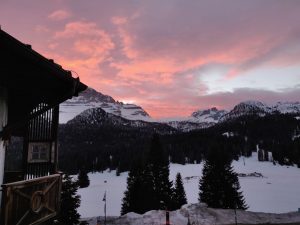 The evening entertainment was fantastic with snow walks, a disco night and shopping trips.  The pupils found these tough going though as the days were long and tiring, however, the pizza supply in Northern Italy had a significant dent in it by the time we left as this was the comfort food of choice for the week! For most, the biggest highlight of the break was having lunch on the mountain and taking in some of the breath-taking views.

After 7 Long days we eventually had to return home and everyone was sad to see the end of a great trip. However, Mrs Meyer is already planning for next year and I would highly recommend it to everyone so put your name down early!

A big thank you to all our pupils and parents who contributed to this year's Harvest Festival collection. We are very grateful for all donations, which will be going to support the Godalming and Villages Community Store.