The Guildford Music Society at GURC was formed in 1992 to make music of a high standard widely available. It is the music society of the Guildford United Reformed Church. Besides engaging well-established artists, the society encourages the many talented young musicians of today and wishes to foster the love of, and interest in, music among children.

On Friday 9th October, 7.30pm, Old Barrow Hillian and Old Witleian, Jozef Gaszka, will perform an organ recital that will be live streamed over their YouTube channel. 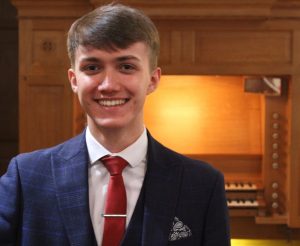 Jozef is a scholar in his second year at the Royal Academy of Music under the tutorage of Prof. David Titterington with whom he studies a wide range of repertoire and techniques accompanied by classes in improvisation, conducting, harmonium, and keyboard skills. During his first year of study he worked on music ranging from French classical to romantic and contemporary, and performed in a silent-film concert of Nosferatu under the direction of Franz Danksagmüller and the organ department’s all-Bach concert. In February 2020, Jozef was the organist for Saint-Saëns Symphony No 3 in C minor, Op. 78 “Organ Symphony” with the University of London Symphony Orchestra, conducted by Peter Stark.

Jozef was a pupil at Barrow Hills and then King Edward’s Witley, where he studied organ with Mr Sliwka and piano with Dr Cave. He achieved a Distinction in Grade 8 Organ and Merit in Grade 8 Piano, and 49 out of 50 in the ABRSM Organ exam. Jozef often accompanied the chapel choir, most notably on their 2018 tour of Rome where he played at Sant’Anselmo all’Aventino and the Basilica of St Paul’s Outside the Walls. He has also played at Guildford and Chichester cathedrals as well as many churches in London including St Bride’s Fleet Street for Bridewell Day. Alongside his studies and other musical commitments, Jozef was an organist at St John’s Parish Church near to Godalming, playing for services and concerts.