On Tuesday 1st December, our Careers Department held their next event in the careers Sneak-A-Peek series. This time the pupils in the session heard from two Old Witleians who work in Law; one a Barrister and the other a trainee Solicitor. The session was held over Zoom to accommodate pupils in the 4th, 5th and Sixth Forms who have been remote learning since 25th November. A total of seventeen aspiring lawyers attended the session.

Michael Parker, who studied at King Edward’s between 2010 and 2013, spoke first. Following his A-levels, Michael went on to study Law at the University of Birmingham from 2015 to 2018, and is now training as a Solicitor at the global law firm DLA Piper, Birmingham. Michael explained the path he took to becoming a lawyer, as well as going into more detail about what is required to be a lawyer, and different pathways within the law profession. He also stressed the importance of extra-curricular activities, mentioning some of the activities he enjoyed taking part in whilst at King Edward’s. Following this, Michael talked about his own work experience placements, and the importance of gaining meaningful work experience. 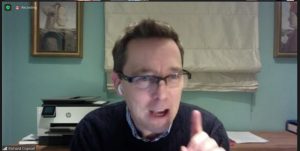 The next speaker was Richard Copnall who was a pupil at King Edward’s between 1978 and 1985, prior to moving on to study Physics at the University of Nottingham. Richard talked about how he started fighting for what was right when he was still at King Edward’s, for example making sure everyone got the best choice of food and helping to prevent bullying. He decided to chose a job that would help him continue to drive forwards his passion of doing ‘what’s right’. He has since go on to become a Barrister fighting in courtrooms. In 2019 he was successful, as leading counsel, before the Supreme Court in Edwards vs Hugh James, a case around professional negligence in medicine, legal and social work.

Richard talked about his career, and what he would recommend pupils to do to achieve what they want, pushing them to start a job that they are actually passionate about, and one they know they will enjoy. He also took advantage of Zoom’s chat features, asking pupils questions such as “What do you think we look for in potential lawyers?” and getting them to type their responses into the chat, allowing everyone to be involved in the discussion. Pupils also got the opportunity to ask questions at the end to both speakers. Here, both men gave plenty of great advice to the pupils, such as read as much as you can and be your authentic self when applying for jobs.

“I wanted to say thank you for organising the talk this evening, I found it very insightful and found even more motivation, having spoken to the Old Witleians, to continue pushing through these last couple of months and make my aspirations become a reality. It was a very pleasant discussion and both Mr Parker and Mr Copnall were very helpful in their advice , which I will make sure to take onboard, so please give them a huge thank you again from me.” – Sixth Form Pupil.

“I just wanted to say thank you very much for organising the career event last night. It was very interesting to hear from Michael and Richard about all of the opportunities, responsibilities and experiences which being a solicitor or a barrister brings. I’m looking forward to the next event.” – 4th Form Pupil