In June, children from Year 6 (and some from Year 5) from ten local Prep Schools enjoyed an hour of mathematical magic on Zoom hosted by actor David Hall. In total, 385 children watched, took part and learned many of new facts, figures and a bit of magic in this inaugural King Edward’s event. 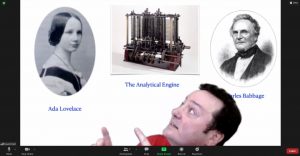 Each show consisted of several demonstrations as well as historical information about famous male and female mathematicians stretching right back to the ancient Egyptians. David astounded the excited children with his mind reading trick and demonstrated how to impress their families and friends by correctly writing the nine times table….at speed! 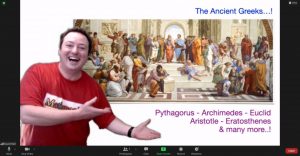 Volunteers were invited to take part in some of the activities which always resulted in a multitude of hands shooting up. David’s mind-reading demonstration was particularly awe-inspiring as he invited one pupil to covertly sign a number between 1 and 15 to their classmates through using their fingers while standing with their back to the screen. David then announced the ‘secret number’ back correctly to the class each time.  Magic…or not?! 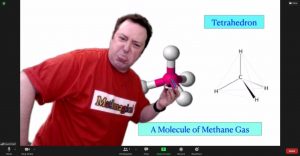 Before moving on to the next activity, David declared it was in fact a trick before demonstrating how it was done.  All very impressive and a trick the audience could learn to do themselves.

Other displays included the introduction of a ‘Magic paper Dragon’ and an exercise with a series of numbers hanging from ‘John Napier’s washing line’;  an intriguing fact about clocks with Roman numerals and ‘Romantic Maths’! 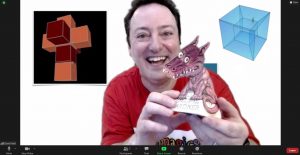 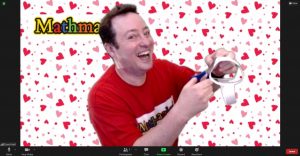 The show ended with a jazzy little foot-tapping song all about numbers which saw many of the children either swaying from side to side, dancing at their desks or in their classroom, and two groups who were based in their Sports Hall had a good work out!

Following the end of the two week series of show, David commented, “I had such fun transforming my ‘in-person Mathmagics!’ show into an online version which is not to say it wasn’t a challenge, in fact it was a far larger challenge than I had originally anticipated! However, I had great fun creating all the different Zoom backgrounds and choosing the music to accompany certain sections and also discovering so many brilliant, diverse Mathematicians from across the world and throughout the centuries whom I introduced in the show.  Suffice it to say, I am proud and delighted the ‘Mathmagics! – online’ was such a success. It was fun to design and even more fun to share it with such tremendous audiences. I am thrilled and grateful that, thanks to King Edward’s’ vision and support in commissioning and launching this show, I’ve been able to inspire so many teachers and pupils this term, opening their eyes and minds to the ‘Wonders of Shapes, Numbers and Maths’ in so many of its amazing forms…! 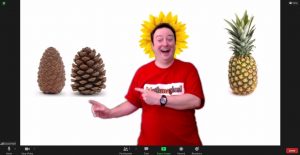 At the end of each show, the  ‘visiting’ teachers were invited to give some feedback, their emails proved very encouraging, concluding that the show was indeed a roaring success. Comments included:

“It was a great show and the children absolutely loved it, thank you so much for organising this for us” – Pennthorpe School

“The Year 5s have made the dragons, I saw them yesterday. They look fab!” – Hoebridge School

“Thank you for yesterday, the girls thoroughly enjoyed the Mathmagics and we have made the dragons. They are very excited to find their eyes following them around them room. We did a brainstorm of everything they learnt from the show, which was loads. Please thank David for another fabulous show. My year 5’s were jealous!” – Rydes Hill School

“A massive thank you for the Mathmagics show this morning. The children all really enjoyed the session as did the teachers. Please pass on our thanks to David Hall as well.” – Edgeborough School

“20 boys in attendance this morning, we all really enjoyed David’s show, it was brilliant. “Thank you so much for inviting us, It was well worth it!” – Aldro School 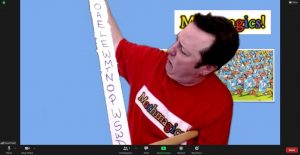 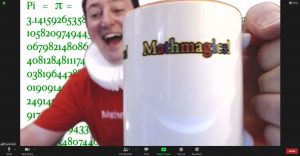