In the middle of June, King Edward’s own Mr Dale Moroney took on the challenge of abseiling down Guildford Cathedral. We asked him all about the charity abseil and experience. 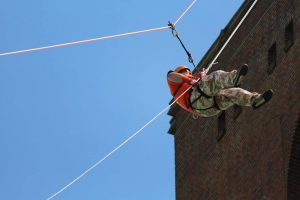 What is your current role at King Edward’s and how long have you worked here?
I am a general (electrical) fitter in the Estates Department, and I have worked at King Edward’s for 25 years and 7 months. 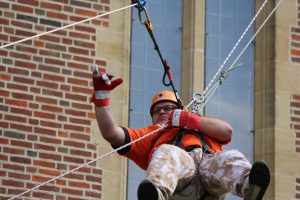 How tall is Guildford cathedral?
The tower is 160 feet (49 m) high, and contains twelve bells, ten of which were cast by Mears and Stainbank in 1965. The bells were augmented to 12 with two Whitechapel trebles in 1975.

How long did it take you to abseil from the top to the bottom?
It takes about 5 – 8 minutes from top to bottom.

Were you scared? How did you feel before the abseil compared to after?
I am alright with heights, I was a bit apprehensive before hand but was pleased with myself when I reached the bottom

What charity did you raise money for and why did you pick this specific charity?
I was supporting Disability Challengers. Three of my children use this scheme along with countless more. Rowan (13yrs) has dyspraxia , Ashton (9yrs) is Autistic and Shannon (6yrs) who has recently been diagnosed with ASD. 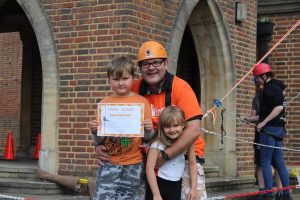