On Tuesday 21st September, our 1st Form boys and girls were treated to an extra special lesson by Hannah from the National Archives in London, delivered on Zoom in the Selbourne Room. First of all, they discussed what History is and debated whether it was about just important things which happened in the past before concluding that it was everything which has happened in the past. They learnt that the National Archives can only hold a limited amount of documents, around 5% of all documents, and that many things in the past could simply not be recorded and stored due to the lack of digital technology we have today.

The pupils learnt that as History detectives we have to piece together what happened in the past using primary and secondary sources, like doing a jigsaw. But have you ever done a jigsaw only to find that there are missing pieces? Many of the pupils had, and all agreed that it can be a bit frustrating being a Historian.

The pupils were asked to look at an item in the National Archives, to describe it and try and work out what it was. Having had plenty of discussions that it might be a dried up cocoa pod or a bit of burnt wood, it was finally revealed that it was a lemon from 1915! So why do the National Archives have a 106 year old lemon in their possession from World War 1? The pupils were invited to become History detectives and try to work out various clues from the bag which was stored with the lemon. We learnt that every document in the National Archives has a code on it and this one had a code which indicated it was ‘criminal’. What could this mean? We had various proposals that the lemon had been stolen from the King, that the lemon could be rations, or even was requested for a prisoner’s last meal. 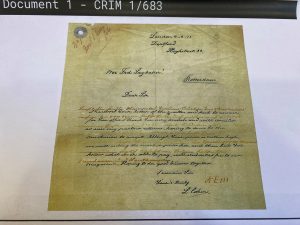 Further evidence Document 1 CRIM 1/683 was presented in the form of a letter written in two different shades of ink, black and red. The pupils discussed various reasons as to what the letter could mean and were very excited to learn that it was written by Carl Mueller, a German spy in the first World War. Carl used lemon juice mixed with formaldehyde to write secret messages but the authorities were suspicious of him and when they searched his room they discovered the secret letters which only needed a candle to them to reveal the secret messages. Things didn’t end well for Carl and he was executed in the Tower of London. 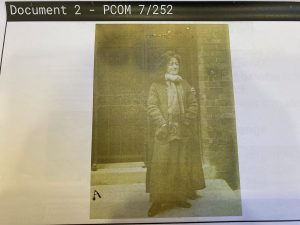 The next piece of evidence the pupils reviewed was Document 2 PCOM 7/252, a photograph of a lady, with her hands in her pockets, with another figure behind her with an arm around her neck but their face obscured. The pupils discussed that she was not smiling and her eyes were closed which is quite unusual for a photograph. Also, what did the arm mean? The pupils were asked to make some ‘inferences’, an educated guess which Historians make. For example, ‘I can infer that it was a cold day when this photograph was taken? Why, because she is wearing a long coat’. 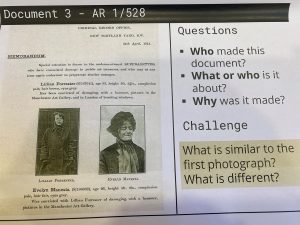 The final Document 3 AR 1/528 was from New Scotland Yard, so it was a police document which was sent around to Art galleries to identify suffragettes Lillian Forrester and Evelyn Manesta, who had committed damage to public art treasures in the Manchester Art Gallery by attacking them with hammers. The document warned that they may strike again. Pupils identified that the photograph they had reviewed as Document 2 was indeed the same photography of Evelyn Manesta but had been doctored to remove the arm around her neck. They inferred that she had her eyes closed in a refusal to have her photograph taken.

We would like to thank Mrs Phillips, Head of History, for organising, Hannah from the National Archives for delivering such a fascinating session and to all our 1st Form History detectives for taking part so enthusiastically.