Today, Thursday 30 September, the team behind a brand new theatre production ‘Other Guys’ visited our school to cast 5 of our pupils in roles for the show which will be performed in London in January 2022. Other Guys is a verbatim play written by Shireen Mula (National Theatre Connections). 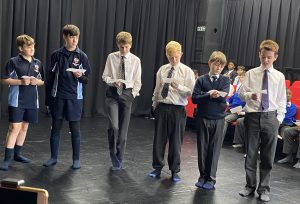 It is a verbatim play exploring what it means to be male in 21st century Britain; over 130 men were interviewed for the show and the script is entirely in the words of these interviewees with some text also being turned into songs. Those interviewed included policemen, social workers, a neuroscientist, primary school teachers, a wrestler, a massage therapist, football fans etc.

The show is directed by Jesse Jones, a founding member of award-winning company The Wardrobe Ensemble and Stu Barber of TOOT theatre company is the Musical Director. Rehearsals will take place in the School’s brand new Studio Theatre before transferring to a London venue. 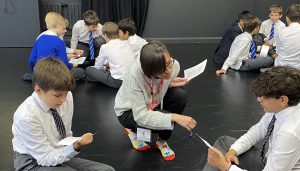 ‘Other Guys’ is supported by City Hall education department, Ovalhouse Theatre, Camden People’s Theatre, Streatham Space Project, Alphabetti Theatre, ARC Stockton and Kiln Theatre. Mrs Cleaves, Director of Drama said “this opportunity comes at the perfect time for us as we expand our department and aim to produce more top quality productions. Working with these professional theatre makers will enrich our own teaching practise and give our pupils a taste of what theatre is really about”.

26 pupils took part in the casting workshop, led by Shireen and Stu, and casting will be announced after half term. The boys who are selected will be working alongside professional actors who will be role models for them throughout this experience.

The rehearsal period will culminate in a work-in-progress showing of ‘Other Guys’ at a London venue where industry professionals, parents and pupils will be invited.