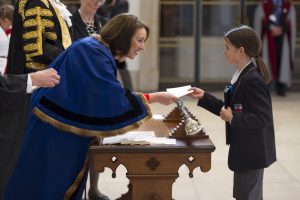 With the sun shining through the rose window, the procession led by the crucifer and acolytes, walked down aisle accompanied by the Chapel Choir singing the processional hymn. On reaching the pulpit, the Beadle, Mrs Pauline McBrown, who is also Registrar at our partner school Barrow Hills, placed the Bridewell mace on the table in front of the Treasurer. 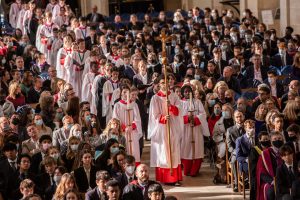 Admissions Day introduces new King Edward’s pupils to their first taste of the historical links with the City of London, which date back to 1553. Following a welcome by the Archdeacon Emeritus and the School Chaplain, Reverend James Radcliffe, Ben, Head Boy, gave the first reading followed by Kokoro, Head Girl.

The ceremony commenced with the Beadle’s formal statement to the Treasurer that the pupils are ready to formally be admitted to King Edward’s.  Head, Mrs Joanna Wright, announced the name of each new pupil who then made their way to the altar. Placing one foot on a mat showing the School’s crest, indicates that the pupil is beginning their journey with King Edward’s Witley. 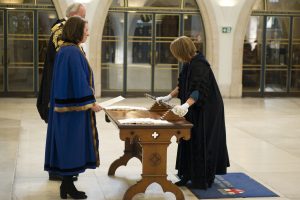 This ceremony symbolises the support and strength that will accompany each pupil on their journey throughout the School.

The Cathedral was almost full with guests including the Mayors of Waverley and Godalming, Lady Estlin, the Governors and Clerk to the Court of Bridewell, parents, several feeder Prep school Heads, teachers and all pupils from King Edward’s Witley.

Maisy, 3rd Form pupil, said “I found myself feeling mildly nervous at Admissions Day as I sat in the Cathedral, waiting for my name to be called. As I walked up the aisle I couldn’t help but smile to myself, I was finally going to be admitted into the School. As I was walking up to the table to receive my promise card, it felt amazing.” 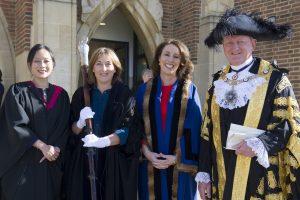