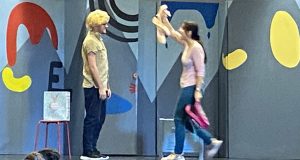 We were delighted to welcome pupils from Bohunt and Pennthorpe to the first of three live Onatti Productions French play this year who joined King Edward’s pupils from Years 8, 9 and 10.

As always, we were entertained by two French actors who, speaking only in their native tongue, this year performed ‘Mon Père Ne Me Comprend Pas’.  Celebrating his daughter Hélène’s sixteenth birthday, Papa is excited about his gift of ballet shoes but he has forgotten just how old she is!  Hélène is so not impressed and complains to her friend on her mobile and later on her Grandmother, who is still learning how to use a mobile device, and to her brother Julien when he comes into the room to give her a card.

For the first time at King Edward’s, the actors used a TV screen which was built into their set so when Hélène rings her friends and Grandmother, they appeared on the screen.  As the conversations commence the audience is given the impression of live two-way discussions.  It was a clever way of introducing further characters albeit ‘remotely’.

The Onatti productions are always professional, fun, funny and spoken with a clear diction that pupils studying the particular language are able to understand and follow without much difficulty.  Throughout the play there was much audience laughter. 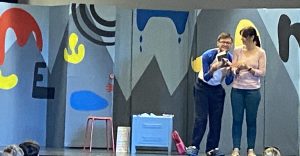 Louise Bonser, Communications Faculty Administrator at Bohunt said “The children really did enjoy it- they were certainly very animated on the bus home!  It really reinforced the value of both language learning and extra- curriculum activities, and we’re already looking forward to bringing our Y9 Spanish students back to King Edward’s later in November.”

Two Spanish actors will be joining us at King Edward’s on Friday 19th November for their production of En El Campanento where we will enjoy welcoming Bohunt pupils studying Spanish to Charter Hall for another great fun play.