This morning we welcomed pupils from Bohunt and King Edward’s in Years 8, 9 and 10 all studying Spanish GCSE to our second of three Onatti foreign language productions.  As always, the two actors gave clear, fun and funny performances which had everyone in the audience chuckling throughout. 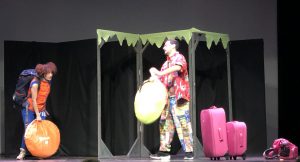 Good friends Matteus and Catalina decide to go wild camping.  Catalina is well practised and arrives at their chosen site with a small rucksack and  teddy bear Boohoo, for the few days.  Matteus enjoys teasing Catalina about her furry companion however, having not been camping before, he has brought a big and small suitcase full of expensive clothing, a large array of kit for washing and a hair dryer! Undeterred by his laughter, Catalina retaliates by teasing Matteus about the mosquitos which makes him very nervous. 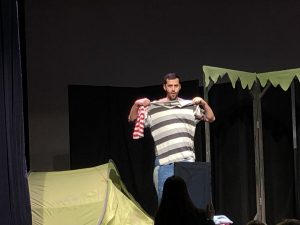 Deciding to have a wash and brush up, Matteus discovers he needs coins for the compostable shower. Catelina gives him the cash and settles down to study the map and a cuppa.  After boiling the kettle on the camping stove she removes it with Matteus’ face cloth!  On his return, Matteus zips up his tent to change but can not decide on which top to wear so pulls out a large framed mirror which he hands to a member of the audience and asks them to hold it up while he makes his choice.  During this time, he is in and out of his tent asking the audience to comment on his trouser range. Shortly afterwards there is a scream as he discovers a spider lurking inside his canvas, Catalina, exasperated, uses a pair of his designer trews to rid his tent of the beast which causes more consternation!

Matteus is definitely out of his comfort zone.  He mistakes a tractor for a taxi, realises he has the wrong shoes for hiking, finds his tent too small, complains about the mosquitos and that there is no signal on their mobile phones! 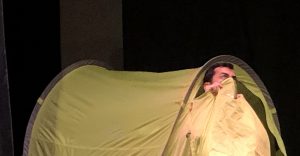 Catalina suddenly remembers that main Reception will have a telephone so ventures off to order a taxi, leaving Matteus who discovers he has packed a tube of crisps and being hungry, he starts to scoff greedily while fantasying about pizza and chocolate.  When Catalina returns with the news the office is closed, he continues to dive in and out of his tent to have a secret munch explaining he is “so cold”.  However Catalina smells food and asks the audience where this is coming from – to which they tell her it is Matteus!  After finding the empty box of crisps in his tent, the two scrabble and Catalina takes one of his designer shoes threatening to destroy it, Matteus then snatches Boohoo, her teddy, and by mistake pulls it’s head off!

Bot now stressed, irritated and hungry, Catalina departs in search of a mobile signal for ordering pizzas.  To assist with their ‘mobile discussion’, a pupil from Bohunt was invited to act as the ‘communication link’ between Matteus at the campsite and Catalina off site (at the back of the hall!).  A series of discussions then took place between the two characters as Matteus keeps changing his mind about his favourite toppings! It was funny and kept our poor guest running between with their messages to each other.

The show finishes with the friends packing up their tents and firmly agreeing they are absolutely not suited to camping together ever again!

Our sincere thanks to Onatti as the two actors were excellent and the chosen use of words and interactions made it easy for the pupils in Charter Hall to follow and understand.  Everyone left with a smile on their faces having enjoyed a great fun 50 minutes. 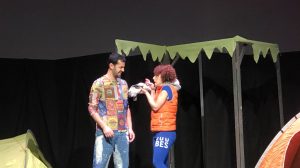 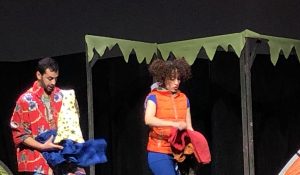 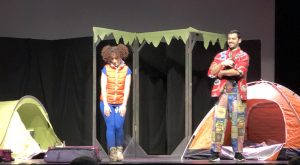 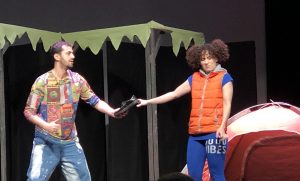