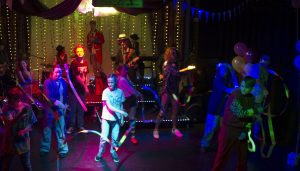 From Sunday 28th – Tuesday 30th November, our new Studio Theatre transformed into Illyria from Shakespeare’s Twelfth Night for our school production. The production had a modern day twist, set at a music festival with partying, live music and lots more partying!

The play is set at Duke Orsino’s music festival, called “ILLYRIA” complete with a live band and donning the tagline “If music be the food of love, play on!” and focuses on twins Viola and Sebastian and the complicated love triangle that has unfolded during the festival. 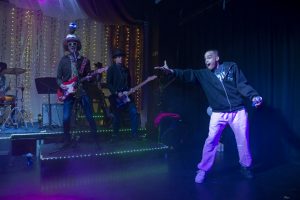 The production was a creative rendition and allowed for modern day connections to a Shakespeare classic, allowing pupils to express their creativity in a variety of ways. The production received a huge amount of praise, towards our pupils, staff, and everyone who gave their time into making the production a success.

Special thanks go to:

Director: Miss MacDonald, who has worked tirelessly for many weeks directing and leading the production. We would like to thank her for her creativity in delivering the show’s unique modern day format.

Further thanks go to: Mrs Davies for make up, the Estates & Facilities Department, Mr Short for IT support, Music Department and all other staff involved.

The list of our talented pupils performing were as followed:

For the full programme, please see below.

We are very much looking forward to our next production, Bugsy Malone, taking place in February – more details to follow!