On Thursday 3rd March, we were honoured to have Old Witleian Stella Dadzie visit the School, in celebration of International Women’s Day.

Ms Dadzie was a former pupil in Elizabeth House, from 1962-1968 on a bursary scheme which focused on providing education to deprived London children. Since then, she has become a published author, highlighting issues surrounding feminism and racism in her books. Ms Dadzie recently talked about her career with the Guardian, in what is a very powerful and inspiring article to read.

During her visit, she was taken on a tour of the School by two of our Sixth Form pupils, which she described as surreal, in particular to back on school grounds. Ms Dadzie then gave a presentation to our Pre-Sixth and Sixth Form pupils, where she talked about her life, and the reasons she stands up for important issues affecting the world today. In her talk, Ms Dadzie referenced situations and events described in her books, Heart of the Race and A Kick In The Belly. To mark her visit, the School purchased copies of her books which she signed and can now be found in our School Library. 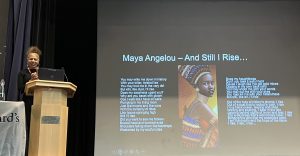 After her presentation, the pupils asked Ms Dadzie engaging questions, about her motivation for writing her books, her childhood and time at King Edward’s and advice that she would tell to her younger self. It is clear that Ms Dadzie’s words had a positive impact on our pupils, and we are sure they will remember her visit for a very long time. We look forward to welcoming her back to the School in the future. 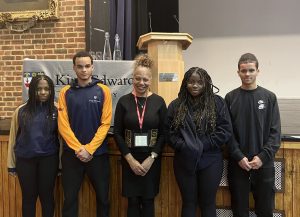 During her time at King Edward’s, Ms Dadzie was only 1 of 2 black pupils. As a School, ‘United By Diversity’ is an important ethos at the School and is evident in all we do. Ms Dadzie was pleased to see the wide diversity across the pupils in attendance. Important days such as International Women’s Day are heavily celebrated in our School for this reason, and this year, we are selling badges and donuts, in fund of the charity Plan International. Furthermore in tutor groups, pupils have been learning about the official International Women’s Day tagline this year, which is #BreakTheBias. We look forward to sharing more next week!