From all years, a small number of pupils went on a day visit to London, to the Guildhall where they took part in the City of London Corporation Schools Chess Tournament. Out of a huge number of children from schools across the country, Lower Sixth pupil William won a silver medal and again Lower Sixth pupil Owen won bronze. We are really proud! All of our pupils really enjoyed the day, and some even commented it has been the best tournament he has ever attended with the School.

Here are some words from Owen:

Having arrived at the Guildhall with expectations high, the King Edward’s chess team began the tournament. The design of the tournament was interesting and facilitated for a less stressful environment than what can often occur in strictly timed tournaments. For each round, 15 minutes was given for the entire game. If after those 15 minutes, checkmate had not been reached a win would be awarded if one player had a 4 or more points advantage or were in a completely positionally winning position. Otherwise, the game would be adjudicated as a draw. A loss gained one point, a draw 2 points and a win 3 points. Consisting of 5 rounds the format allowed many participants to be on high scores until the very end of the tournament. I enjoyed the fact that even when I was 4 points down, I could still try for a draw by reducing the points deficit, whereas in a normal game a 4-point advantage is almost always winning in the long-term. This encouraged me to never give up, thus making games enjoyable until the end. But, to conclude perhaps the most pleasing aspect of the event was the sporting nature of the participants, there was a feeling of relaxed competitiveness and respect, something which unfortunately can often be absent from more serious tournaments. All in all, it was an enriching and enjoyable day! 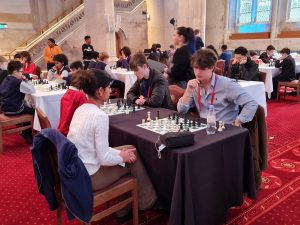 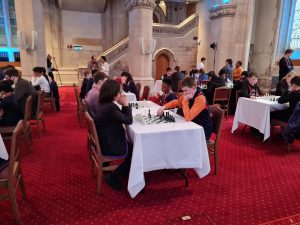