On Tuesday 21 June, Year 5 and 6 children from ten local prep and primary schools took part in the annual King Edward’s Maths and Science Day Challenge. With each school bringing six children, we were pleased to be able to welcome 54 children from Year 5 and six from Year 6 from Royal Grammar School, St Hilary’s, Parkside, Oakwood, Holy Trinity Pewley Down, Wonersh and Shamley Green, Barrow Hills, The Chandler School, St Ives and Greenfield.  Each child was assigned to a team of three from their school and started their very busy day in either Chemistry, Biology or Maths where, working together, they were given the task of solving a series of challenges. 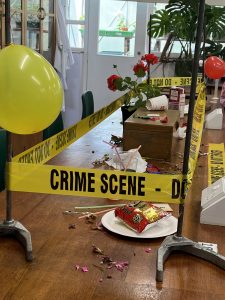 Chemistry teacher, Mr Fox, escorted his group of children to a cordoned off crime scene which was being assessed by a very official Forensic Scientist kitted out in white overalls. The scene consisted of various items strewn on the ground including a candlestick, a black handbag, spilled paint, a discarded can of Coke and strands of red cord. Everyone was informed that, being key pieces of evidence, it must be concluded that this was now a ‘murder enquiry’. It transpired that very sadly, Mr Fox’s friend and mentor, Professor Snuggles had been the victim. 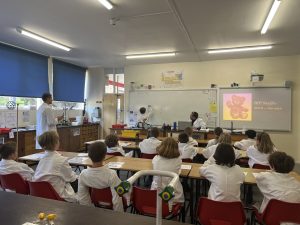 Having discussed and shared their thoughts, the children decided the candlestick was the most likely murder weapon and it was suspected that traces of DNA would be found on the Coke can, a major component to uncovering the identity of the murderer. Once back in the Chemistry classroom, further evidence was revealed as blood spatters had also been left at the crime scene and CCTV footage had captured three suspects who were all, importantly, of different heights. Using this information, the children were able to carry out blood spatter experiments (using fake blood!) at various heights thereby ascertaining the identity of the killer. It turns out this dastardly person was no less than Mr Davies, our Deputy Head, Academic! 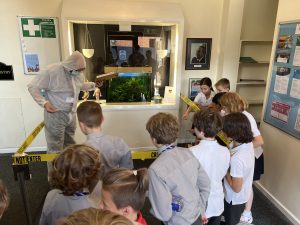 The teams working in the Biology classroom, also had to solve a crime but rather than a murder, their challenge was to discover who had stolen an expensive King Edward’s ceremonial cup. Once again, everyone was presented with a complex crime scene along with evidence bags for each of suspects, all well-known animation characters – including Mickey Mouse, Bart Simpson and Princess Fiona. A ransom note had been delivered and crucially, flowers had been found scattered at the crime scene. To decipher who the culprit was the children used microscopes to compare pollen from different flowers and chromatography to analyse each of the suspects’ pens against the one used, by the thief, to write the ransom note. Through all this evidence gathering, the children were able to successfully identify the culprit who turned out to be Bugs Bunny. 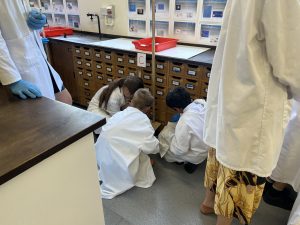 The Maths challenge in the Sports Hall, was a race against time. The children spent either the morning or the afternoon solving up to 40 individual puzzles. As they completed one puzzle, they had to have them signed off before moving on to the next one. The challenges ranged from number addition to creating pictures from cut up shapes, matching up the dots on domino pieces to solving a green bottle puzzle within a small space. The maths activities ranged in difficulty from being really tough to being more straightforward. Each of the teams worked well together to solve as many puzzles as they could within a time limit. Parents were invited to attend the final exercise of the day making their way to join either the Warburg Science School or the Sports Hall to view the action.

By the end of the day everyone was buzzing having learnt many different skills and met new friends. Before leaving, each pupil was presented with a Maths and Science Day Challenge certificate and a calculator ruler to take home.

Thank you to everybody in the Maths and Science Departments for their ingenuity. They really pulled out all the stops to create an incredible day for our young guests. Huge congratulations also go to the children for successfully solving the crimes and puzzles with such committed teamwork.