King Edward’s are celebrating their pupils’ success in the first set of A-level and GCSE exams since 2019 which is testament to their resilience and tenacity, as well as the teachers’  skill and adaptability, having had to manage significant disruption to normal learning. 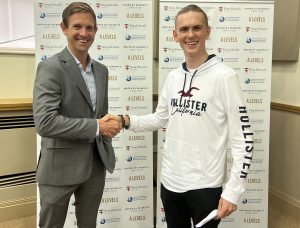 In the Sixth Form, pupils benefit from small classes, personalised tracking of progress and a full co-curricular programme with 60% of all grades awarded at A*- B and a 100% pass rate. All pupils should be congratulated on having to complete a significant portion of their course remotely during COVID-related disruption, but a number of pupils deserve special recognition. Maxim Agrest achieved straight A’s in History, Geography and Philosophy, which enables him to read History and Politics at the University of Warwick. Head Boy Ben Charles, from Guildford, achieved A*BB and goes on to read Music at the Royal Academy of Music. Sylvia Yuwen impressed with an A* in Maths which will stand her in good stead to excel in her undergraduate studies in Mathematics with Finance and Accounting at Queen Mary, University of London. Also benefiting from the school’s track record of excellence in Business and Economics, local pupil Ali Hashemi achieved AAC in Business, Geography and Physics and goes on to read Accountancy and Finance at Loughborough University. Elite National standard cyclist Elliot Moreve also secured a sports Scholarship to read law at Bournemouth University.

Commenting on the School’s A-level results, Mrs Joanna Wright, Head, said: “The breadth of subjects that our Sixth Formers are going on to study at University, demonstrates that this is a school where they can pursue their interests, be themselves and develop the knowledge, skills and understanding to succeed in the next stage of their learning journey, wherever that takes them. This year group, in particular, demonstrated leadership in character as well as in achievement. They are ambitious, selflessly so – well done!”. 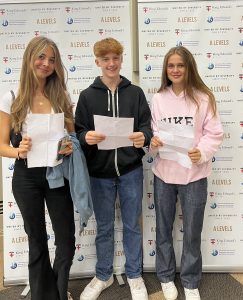 In the 5th Form, 47% of grades [almost half of all grades awarded] were awarded were at level 9-7 (equivalent to A* and A) which is a significant increase on the last set of public exams. This reflects the School’s ambition for everyone to reach for their personal best, and its commitment to driving up academic standards to help every pupil succeed. Notable successes include one Academic Scholar who excelled with 9 GCSEs at Level 9 and an A in Additional Mathematics; Louise Lawson-Foia, who achieved 7 GCSEs at Level 9 and Alok Uprety with 6 GCSEs at Level 9 and an A in Additional Mathematics. In addition, a number of our Lower Sixth pupils are to be congratulated with 4 pupils achieving A* grades in Maths after only one year. Similarly, there were some notable achievements amongst pupils in the School’s 1 year Pre-Sixth Form Program, with Rosa Ryder achieving 4 GCSEs at Level 9 and 1 at Level 8.

The School’s charitable foundation supports a number of pupils, across the school, so we are particularly proud to celebrate their results. Amongst our A-level cohort, Corin will remain in the local area as he goes on to West Dean College of Arts and Conservation studies.

Reflecting on the journey pupils have been through over the past 2 years the Head, Mrs Joanna Wright, said, “Given the considerable challenge pupils have been confronted with, I would like to congratulate all exam cohort pupils for persevering and successfully completing their studies. Around each of the exam statistics is a story, but we are very proud of what all our pupils have achieved and of the work of the incredible staff, and parents, who have supported them. In addition to the impressive marks our pupils have secured, however, the rich breadth of experiences they have gained, through participating fully in so many areas of school life, has helped scaffold outstanding opportunities for personal development – something that was noted in the School’s recent Inspection report”. 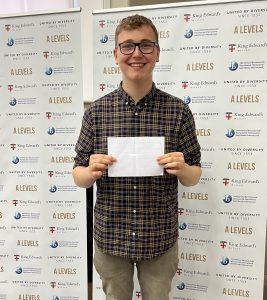 Looking ahead, there is an exciting future at King Edward’s: in September, a bespoke Upper Sixth Form House will be unveiled, which enables every pupil to gain independence and ownership of their learning, followed, in October, by a new library, café and collaborative learning space. King Edward’s Witley runs the International Baccalaureate programme alongside A-levels so pupils are free to choose the course best suited to their interests and career trajectory. The IB results were released earlier in the summer; the school’s average score of 32.3 out of a maximum 45 puts it above the global average.  For more information about the Sixth Form, the school will be running a dedicated Open Evening on Thursday 29th September.