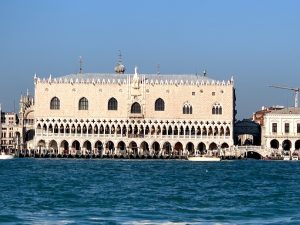 A quiet buzz of excitement descended the tarmac just before 5am on Thursday morning as 35 pupils, parents and staff all met at King Edward’s Witley. Cassocks, music and plenty of water were packed into suitcases before we set off for Gatwick where we were met by more pupils and parents, and helpful BA staff who fast tracked us through check-in and almost straight onto the plane.

Two hours later we had passed over the Alps and saw our first glimpse of Venice.  A brief walk and we were on our boat, the Dandalo, and heading to the Youth Hostel on the Guidecca.  It was a bright and crisp morning when the iconic image of Venice came into view.  The Doges’ Palace, the Campanile, Santa Maria di Salute, San Marco, the Grand Canal and so many other landmarks lay before us.

A swift check- in before heading over to San Zaccaria by Vaporetto.  Venice was reasonably quiet, allowing us to appreciate the landmarks without the usual bustle.  A quick walk past the Bridge of Sighs, Piazza San Marco and into the labyrinth of streets for a late lunch.  Pizza was the order of the day and we were made to feel very welcome in a quiet family run restaurant. 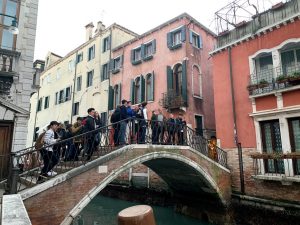 Then it was off to San Giovanni e Paolo for a walk round the tombs of the many Doges which decorate this Basilica.  In contrast to the plain exterior of the Basilica, the marble façade perspective and optical illusions of Venice’s hospital is a work of art in itself.  After some more walking, we ended up in Miracoli, a church known as the chocolate box due to it shape and whole interior and exterior which is lined with marble.  It’s a particular favourite for Venetian weddings.

Next was sunset at the Rialto Bridge.  The views over the Grand Canal were spectacular as the sun set over our first day in Venice.  A few moments later we were back in Piazza San Marco for the end of the sunset.  Napoleon had called the Piazza ‘Europe’s grandest drawing room’ and it was easy to see why.  It was now time to head back across the water to the Giudecca and an evening in our base.  As we travelled across the water, we had our first view of Venice at night with so many landmarks flood lit.  Everyone was contently tired and ready for bed, a great first day.

A big thank you to all our pupils and parents who contributed to this year's Harvest Festival collection. We are very grateful for all donations, which will be going to support the Godalming and Villages Community Store.