The quiet murmur of breakfast started our busiest day in Venice.  After a briefing we headed across the water to the Zattere to explore this quieter corner of Venice.  As we walked along the Zattere, Venetians were practising rowing in boats for hotly contested races being held later in the year.  It was fascinating to look into open dimly lit warehouses full of boats belonging to the six districts of Venice.  As we turned the corner, we passed Venice’s customs house at the mouth of the Grand Canal which is now, just a monument to the past.  This was where all goods entering Venice paid taxes for imports from across the world.

Ahead of us stood the imposing octagonal church of Salute.  Built in the early 1600s as a thanksgiving for delivering Venice from the plague, it is now one of the most recognised views of Venice.  Next it was full speed ahead, past Peggy Guggenheim’s museum to the Accademia – Venice’s famous art gallery and home to priceless paintings.  Far too much to take in, we just focused on a few of its most important treasures.

The morning came to an end with a trip by vaporetto up the Grand Canal to Rialto for lunch and some retail therapy.  Walking through Venice’s fish market was a fascinating insight into how everyday life for Venetians has not changed for hundreds of years.  After an hour of free time, we headed to Frari to look around Venice’s largest basilica and home to some of its most famous images.  From Titian’s altar piece to many imposing tombs of great Venetian figures. 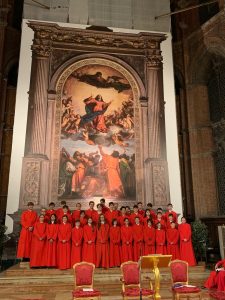 Next it was around the corner to the Scuola San Rocco to experience its imposing rooms and then over to a museum dedicated to Leonardo da Vinci.  This was a hands-on exhibition where we could touch and interact with many of da Vinci’s famous inventions.

After a break for refreshments it was back into Frari for a rehearsal before Mass.  Although cold and tired, the Chapel Choir were on form as their singing echoed around the interior, and we were rewarded with very kind words from the priest and applause from the local community.  After the obligatory photos, we decided to head back to the Giudecca for our evening meal.  The Chapel Choir were becoming more adventurous with their choice of food as seafood dishes started appearing on plates!  Perhaps a walk through the fish market that morning made an impact.  Tired but content, we made the short walk along the lamplit Giudecca to the Youth Hostel to finish our busiest day.