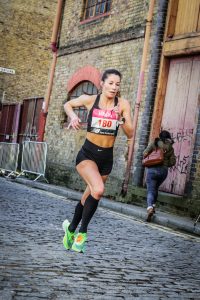 Mrs Hannah Pullen, Head of Girls’ Games, has had a run of success – winning as first female in the Hampton Court Palace Half Marathon, Senior Women Category, on 15th March and also achieving a new personal best at the Vitality Big Half London on the 1st of this month.

Hannah was the first female to win the Hampton Court Palace Half Marathon with a time of 1 hour 23 minutes and 36 seconds from a field of 2,757 runners. Her pace was 6.22 min/m. Overall, she came 38th including the male runners.

This is the only Half Marathon to be held at the famous and historic royal home. The race started inside the gates of the Palace and finished in its beautiful gardens.

In the Vitality Big Half on March 1st, Mrs Pullen was really pleased to get a personal best for the half marathon distance. Her time was 1 hour 20 minutes and 32 seconds and she was the 35th female out of a field of 22,120 runners.

The Vitality Big Half, London’s community running festival, started at 09:00 by Tower Bridge and finished at the Cutty Sark, passing through the boroughs of Southwark, Tower Hamlets, Lewisham and Greenwich.

The Vitality Big Half features some of the biggest names in distance running. The event also doubles up as the British Half-Marathon Championships, so there is a strong domestic field vying for podium places. Behind the elite runners, a record 16,222 runners crossed the finish line to complete the third edition of the 13.1-mile event designed for everyone, no matter their age, background or running ability.

After completing the gruelling runs, Mrs Pullen said, “The Palace Court course was tough! But I came away with 1st female so I’m very happy with that! I came 38th overall, including the men, out of almost 3000 runners. I had great support and encouragement from the staff and pupils at King Edward’s Witley and that spurred me on to achieve the best results that I could. I’m lucky to have access to the excellent sports facilities at King Edward’s which has helped enormously with my training during my spare time. Competing in both the races was a great preparation for my next competition, the London Marathon although understandably with the current coronavirus situation, that particular challenge has now been postponed until October. I hope that my achievements will help inspire our pupils to acquire a passion for sport, that benefits not only their health but also contributes to the development of other key skills. If you set your mind to it you can achieve anything you want to do.”

Mrs Pullen remains focused on her training for the London Marathon, which is scheduled to take place October 4th.