Celebrations were held as Luke and Cameron were selected by The Independent Schools Football Association (ISFA) as best players in their age group.

In a national ISFA trial held on 19 September the two boys took part in the Under 14 and the Under 15 categories respectively. Each succeeded in going through to the second series of trials which took place in Shrewsbury on Sunday 28 November. Luke and Cameron successfully progressed through this trial and will now join a squad of 22 players from around the UK. Their fixtures list is yet to be finalised, but excitingly, they will be playing against Football Academies around the UK in the new year. 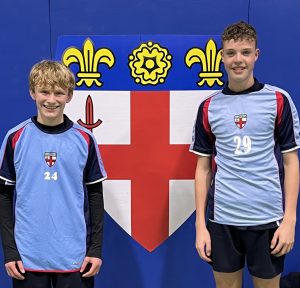 Mr Adam Ryman, King Edward’s Football Coach, said “It is very exciting and it’s brilliant for the boys to represent the School at ISFA in 2022. They both fully deserve this amazing opportunity. They continually work hard in every training session and are both super talented. As their training coach, I am so proud of their achievements and believe their future will be very exciting. I am really looking forward to seeing how these two boys develop.”

Mr Garry Haylock, King Edward’s Head of Football, commented “Both boys have worked very hard during their training sessions and totally deserve this success. They have been an example to others and have shown what can be achieved through hard work and determination. Luke and Cameron should be very proud of their success, as are we, but they need to remember that getting into the squad is just the first hurdle, there will be plenty of others to come!”