On Monday 23rd May, we were delighted and honoured to welcome Darcy Bourne, England and International Hockey player, to King Edward’s.  In her presentation to the 3rd, 4th and Lower Sixth Form pupils, Darcy spoke candidly about her journey and career in the worlds of football and hockey.

Brought up in Surbiton by a very supportive family, her dream was born when, at the age of six, she watched the Beijing Olympics on television and made the life affirming decision that she wanted to be a part of this and become an Olympic competitor when she grew up.

At the age of 10, she joined the Chelsea Girls Academy – a regional talent club aimed at supporting the development of young female football players giving them the opportunity to compete at the highest level in their age group.  Leaving football, a sport she loved, she joined Surbiton Hockey Club and as an U13 player where she progressed to County level becoming Captain of the U16s and then the U18s.

Darcy was one of eight players added to the women’s squad in January 2022 having impressed during the Talent Confirmation process and made her senior international debut for England against Argentina in February 2022. Darcy explained that, interestingly, England’s national hockey team has only had four non-white players at the senior level.

She spoke to the pupils about her various setbacks which included several injuries (broken ankle, broken nose, pulled hamstring) and being chosen as a reserve player for the biggest tournament of the year – the U18 England selection.  Due to a member of the team pulling out through illness, she was called up just two days before the event and excelled by giving the best performance of her junior career.  She explained to the attentive pupils how she managed her sporting life alongside her school life by working hard, talking to her teachers and coach, and arranging time out from sport to study and to take her exams.

At Duke University in the United States, Darcy studied Sociology, French and Business.  Her interest and commitment to Diversity and Inclusion began when, in 2020, she joined the Black Lives Matter protest in London following the death of George Floyd.  A photograph of her holding a banner at the march was shared internationally generating hundreds of messages of support including one from Martin Luther King III. She is a passionate advocate for equality in both sport and society, co-founding the Beyond Your Game programme.

Having role models was, and still is important to Darcy. She named her own role models as Jessica Ennis-Hill, Serena Williams and Denise Lewis, who is also her mentor.  Darcy’s goals for the future are to play at the Hockey World Cup, at the Commonwealth Games and to take part in the Paris Olympics.  Her motto is “if you think you can do it, you can” and her (personal) core value is “treat people as you would like to be treated.”

It was an excellent talk and the pupils asked a multitude of questions at the end ranging from her family background, coaching activities through to which football team she supports!

A huge thank you to Mrs Fitch, Head of Girls Games and Head of Hockey, who organised this enlightening and inspirational event. 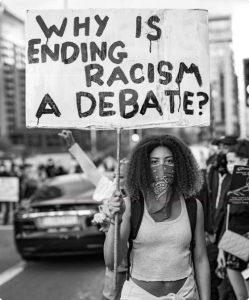