On Saturday 5 December, the School held its first remote Chess Tournament. A total of 31 players took part in the Tournament consisting a mix of feeder school guests and King Edward’s pupils. Last year we hosted a ‘Simultaneous Exhibition‘ at the Old Bailey in London with the UK number one player Michael Adams.  This event saw individual players competing with several other players simultaneously as seen in the Netflix series ‘The Queen’s Gambit’ which launched on 23 October this year.  To date, 62 million households have watched this show resulting in chess set enquiries rising by 250% on eBay and search queries on Google for ‘how to play chess’ hit an all time high in 9 years!  The original ‘The Queen’s Gambit’ novel which was released 37 years ago, is now a New York Times best seller and the number of new players registering on ‘Chess.com‘ has increased by 5!  Incredible. 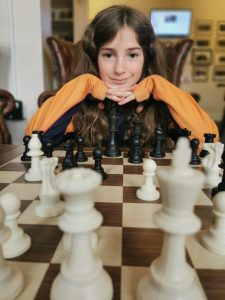 Our pupils have been enjoying chess as an after school co-curricular activity for several years and before lockdown, the pupils were lucky enough to be tutored by Grand Master Nick Pert and to visit the London Chess Tournament in Olympia. Mr Sibachir, a Maths teacher, inherited the weekly Chess Club four years ago from Mr Todd. The School now currently has 18 chess players – eight girls and ten boys. The 1st and 2nd Form pupils, four girls and ten boys play on site on a Monday after school. The remaining 3rd Form to Upper Sixth Form chess enthusiasts’ study famous chess games and play a mini tournament every Wednesday. It is a game taken very seriously. Since lockdown earlier this year, the pupils have enjoyed 20 online chess tournaments. Chess is becoming more and more popular, partly thanks to the ‘The Queen’s Gambit’, with children as young as Year 2 taking part. Chess is a fascinating, enthralling, and exciting hobby enjoyed by more and more King Edward’s pupils. Due to the roaring success of this latest online tournament, it is an activity we will now be organising once a term.

Mr S, Lanesborough School and 1st prize winner – “Thank you so much for organising such an amazing tournament my son had so much fun, you have made a little boy very happy.”

Mrs D, Chandler School – “My son absolutely loved that! He didn’t do particularly well but he didn’t give up! and he had heaps of fun. 3 draws, 3 losses.”

2nd prize winner William, 5th Form pupil, Wakefield House – “I like chess because it’s very strategic and helps you to concentrate on what your opponent might do and how to enact a trap and to use strategy to win a game. It helps improve your strategic thinking, you need to think of the best opening, and which ending to use against different opponents as well as having a well thought of the middle game. Chess enables one to improve how far they can see into the future and predict events.” 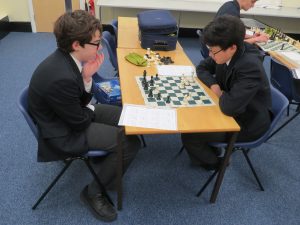 Deniz, Head Girl and Upper Sixth Form pupil, Tudor House– “Playing chess is like delving in the game of life! You must make a move to win. You need foresight and planning to get an advantage and you must beat challengers to become the champion.”

Rajan, 5th Form pupil, Edward House – “Chess is a game of profound complexity which challenges the player to think beyond the trivial movements of the pieces and about the complexity of possible tactics and winning combinations. It also challenges the player to consider every possible variation of a sequence of moves, something which is both fascinating and difficult, making the game even more entertaining.”