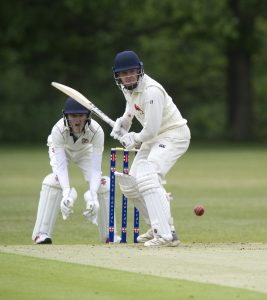 On Thursday May 26th, King Edward’s Witley hosted the prestigious Marylebone Cricket Club (MCC) in our annual fixture. It was a great spectacle of quality cricket, with great sportsmanship, and a fantastic BBQ.

The 1st Team, which consisted of both pupils and a few staff members, including Rikki Clarke, Head of Cricket, put in a solid bowling display against a strong opposition as the MCC opened the batting. With a few Sixth Formers out for their exams, pupils from other year groups stepped up to play against the experienced opposition, including Will all the way down in 2nd Form. The boys put in a valiant effort by taking six wickets against a resilient MCC squad, with 4th Form pupil Henry taking two of those wickets. A special mention goes to Will, who secured his first ever men’s wicket by striking the stumps with a fantastic bowl.

After a long morning, and the waft of the BBQ spreading across the field, players and spectators queued up for the immaculate food that was put on display. With steak, burgers, stuffed mushrooms, salad, and a fantastic cheesecake to top it off, the players tucked in before heading out for the second half of the day. A declared score of 194/6 by the MCC meant that King Edward’s had a tough target to chase.

With Alex getting bowled out on his first ball, it was clear this was going to be a tough battle. Some precise bowling and professional fielding saw the MCC fly through the wickets. However, as the fifth batter came into play, things started to get moving. Again, 2nd Form pupil Will managed 11 runs, whilst Freddie also secured 10. A further 11 runs by Mr Towl, Graduate Sports Assistant, helped their case but it still was a fierce hill to climb. Our Head of Cricket and ex professional Surrey and England player, Rikki Clarke, put on a masterclass by hitting 53 runs in 53 balls. Not only did this bring up King Edward’s score, but the pupils learnt a tremendous amount batting with such an accomplished cricketer.

It was not meant to be for King Edward’s Witley on this day however, who were all out for 106 runs. It was an excellent day for both the pupils and the School to play against such a prestigious club and we would like to thank MCC for visiting. A great display of sportsmanship shown by the experienced players to help boost the development of our aspiring young cricketers.