Every year King Edward’s holds a Science Lecture inviting local primary and prep schools. These are hosted and performed by actor David Hall who metamorphoses into a famous scientific character from history.  The events are interactive, loud and fun. Numbers are limited to a maximum of 160 pupils per show of which there are four (repeated)  over a two-day period each lasting one and a half hours. 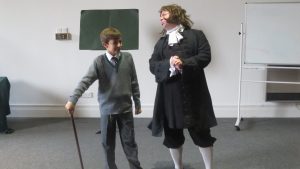 Aims
To inspire and encourage pupils’ love of science and history. The youngsters are invited to volunteer and participate in all the activities which always involves one person or a group depending on the specific taking part in the experiments. 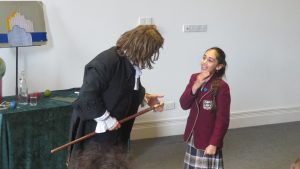 Resources
The Science Lecture is held every year in the Lecture Theatre.  Teaching and non-teaching staff attend along with the King Edward’s 1st Form pupils.

David Hall designs and orchestrates the show bringing his own props and adding his own unique character into the mix.

Impact
The invitation is sent to Year 6 pupils from surrounding local prep and primary schools giving them the opportunity to learn about an important historical character in scientific history, the discoveries and inventions, and their impact on the modern world.

Pupils are also involved in ‘living history’ through the activities, acting and the slides. 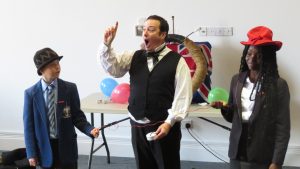 Pupil Involvement
Over 70 King Edward’s 1st Form pupils attend one of the sessions either in the morning or afternoon.

Between 250 and 300 visiting pupils from local prep schools.

Frequency
The Science Lecture takes place once a year in November over a two-day period. Each lecture lasts 1.5 hours and takes place in both the morning and afternoon over two days.