Spy School takes place over four Saturday mornings every Spring. Children aged 9 and 10 from the local areas are invited to take part in four individual two hour workshops. Invitations are sent to local schools and notifications are posted on the King Edward’s social media channels and the website. The reputation of the King Edward’s Spy School has so increased that a waiting list has had to be put in place with numbers limited to 25.  The Spy School workshops partly sit under the STEM umbrella and involve four specific areas – English, Science, Maths and Geography. Children are encouraged to attend each week dressed as a spy.

The Aim
To motivate and excite the young people in each of the different workshop activities.  The trainee spy cadet children learn a new skill each week, meet new friends and participate in team activities. Every exercise is completed in small groups of three or four.

Depending on the nature of the activity – interrogation, invisible inks, code breaking and travel incognito, each workshop takes place in either a classroom, a science lab or  outside on the lawns around Queen Mary House, the Chapel and the tennis courts.

King Edward’s teaching and non-teaching staff are involved in each event and parents are welcome to stay in Piccadilly Café for the duration (1 and a half hours) to relax, have time to themselves and enjoy the refreshments.

Impact
Spy School is an opportunity for local prep and primary school Year 6 children to meet at King Edward’s, enjoy the facilities, work together and make new friends over a four week period. They learn new skills in four subjects, take control of their own team activities and have great fun.

The English workshop teaches the spy cadets about interrogation which they then have the opportunity to practise on each other. Volunteers are then invited to sit at the front of the class and answer questions from the audience. In the Science workshop they learn how to make, and write with, invisible inks.  They learn how to crack the code in the Maths workshop and how to travel incognito in the final Geography activity.

At the end of the four weeks each child attends a ‘Passing out Parade’ where they receive their certificate of achievement at becoming a ‘King Edward’s Spy’. Parents are invited to watch in the Bridewell Room.  A group photograph is then taken of everyone with their certificates in the Quad.

Each pupil is given a gift on departure each week which is relevant to the workshop they have attended in the morning such as ‘police’ notebooks, invisible inks, and a King Edward’s branded calculator ruler.

Pupil Involvement
Ten King Edward’s 1st Form pupils assist at the start of each event by meeting and directing the young visitors to the reception desk. They then act as King Edward’s ‘spies’ and take part in a short pre-briefing where they exhibit their ‘spy’ skills and talents to the visitors (all very serious!). A maximum of four pupils then stay to help in the workshops assisting with activities as well as taking part before escorting the visitors back to the Piccadilly Café to meet parents.

Frequency
Once a year over a period of four Saturday mornings during February and March. 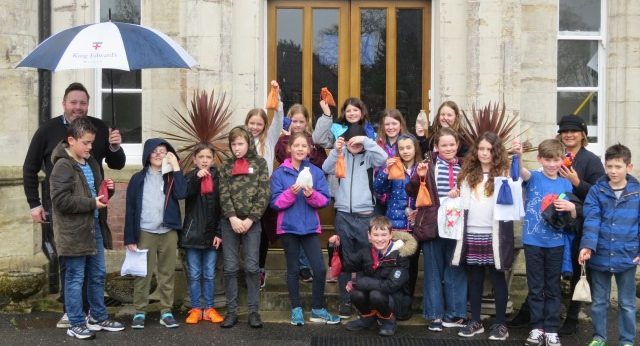