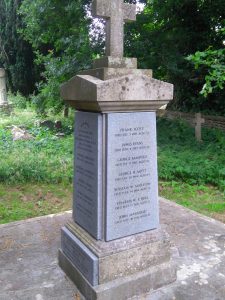 The Pupils’ Memorial was erected in memory of the boys who died at the School during the late 19th and early 20th centuries.  Reading the names and ages reminds us how fragile life was during that time.  The memorial acts a register to all those who left us far too young.

Over time, the area around the memorial had become overgrown. In 2010, Mr Bertie Mawer (History and English teacher, Edward House Master for 27 years and Deputy Headmaster) and his wife, Dr Rosemary Mawer, began a campaign to regularly tend to the memorial.  In the 2017/18 academic year, the Old Witleian community raised £5,700 to restore the memorial and the surrounding stone; the stone edging was reset and the names were engraved on granite plaques which were attached to the original memorial.  The School is grateful to the Mawers and all in the KESW community who have contributed over the years to help maintain the memorial.

North Face of the Memorial

East Face of the Memorial

South Face of the Memorial

To the memory of the following boys who died at King Edward’s School Witley and are interred in this churchyard.

This memorial is erected by the King Edward’s School Old Boys’ Association, May 1910