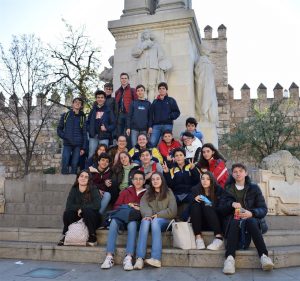 The visit included a visit to Jerez itself with its Moorish castle and famous ‘bodega’ wine cellars. We were also fortunate enough to visit Cádiz, home of the original Spanish constitution, and its Cámera Oscura for views over the town and the entrance to the Straits of Gibraltar. The pupils took part in ‘Pádel’ tennis with their partners as well as enjoying an opportunity for a quick game of football on the artificial playing fields of the school grounds.

On the last we all boarded a bus to Seville, with our exchange partners and, greeted by clear blue skies, set about visiting the Real Alcázeres Moorish palaces and the Cathedral – the final resting place of Cristobal Colón, otherwise known as Christopher Columbus. Pupils walked up the ‘Giralda’ tower, now part of the Cathedral but previously the minaret from the former Mosque, from which Muslims were originally called to prayer. We finished the day with a brief visit to the Plaza de España to see its beautiful ceramics and architecture. 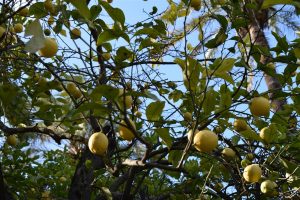 When asked for their most memorable experiences the pupils were quick to recall the time spent with their host families. Whether staying in Jerez or travelling further afield (two pupils stayed in Cordoba!) they were all treated to authentic Spanish living. In December Jerez comes alive with Flamenco carols and ‘Zambombas’ – impromptu performances of Flamenco Christmas songs by families, friends or work colleagues. More ‘typical’ scenes were also apparent through the many Nativity scenes erected around the city by churches and other organisations.

The final departure was a sad event but tinged with good memories and perhaps leading to lasting friendships. Our thanks go to our partner school and to the ‘Comunidad’ of priests of the school, who hosted us so warmly. We really look forward to the next visit, ¡hasta la próxima!