To celebrate the end of GCSEs and the end of the Summer Term, the 5th and Pre-Sixth Form pupils, currently in Elizabeth and Wakefield Houses, have been taking part in an activity week organised by Miss Condy, Elizabeth Housemistress, Mr Macmillian, Wakefield Housemaster, and Mr Campbell, Head of 5th Form. 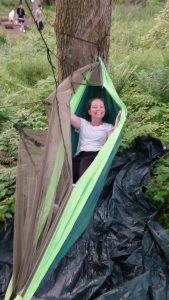 On Saturday 12th June, to start the week of fun off, pupils enjoyed a campout! From 8pm to 8am they camped within King Edward’s 100 acre woodlands, built fires and shelters, and even barbequed their own dinner in a firepit. Thanks to the good weather and their sturdy shelters, all pupils had a great nights sleep, ready for the coming week. 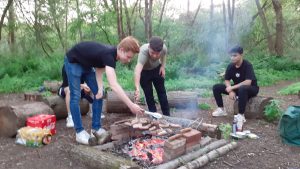 The next day out, on Monday 14th June, for the 5th Form was a visit to Chichester Water Sports. Pupils had the opportunity to do a huge arrange of water based activities, including banana boating, kayaking, stand up paddle boarding and going on Chichester Water Sports’ brand new, super-sized inflatable Aqua Park. 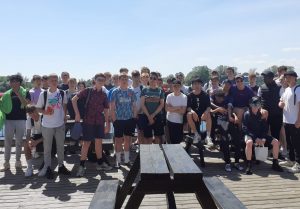 Taster lessons, inflatables and a visit to the White Hart Pub

The 5th Form started the morning of Tuesday 15th June by trialling Sixth Form lessons before they join the Sixth Form in September. They then headed down to Lower Gurdon’s sports field to spend the afternoon playing on five different inflatable activities, including a bouncy castle, sumo wrestling, Gladiator jousting and tackling an inflatable obstacle course. To wrap up the day, the boarders enjoyed the locally famous ‘Burger Tuesday’ at local pub, The White Hart!

On Wednesday 16th June, making the most of the hot weather, members of the 5th Form and staff went to local theme park Thorpe Park, where a whole day of rollercoasters and fun awaited!

On Thursday 17th June, after another morning trialling potential Sixth Form subjects, the 5th Form had a ‘traditional’ silly sports sessions! With lots of activities, including face painting, making chants and playing music, it was a great chance for the boys and girls to let off some steam all while having fun with their friends. The activities again continued into the evening with a Samba Evening, featuring music and a sumptuous BBQ.

On their last official day of 5th Form, Friday 18th June, the pupils had a special Chapel Service and Awards Ceremony, which was livestreamed to parents at home who, due to COVID regulations, could not attend the event. Here, all the pupils received awards for their hard work this difficult year, a celebration of all they had achieved in their years at King Edward’s. For many it was also a chance to say goodbye to the pupils and members of staff who had made their experience at King Edward’s so great. The boys and girls then spilt for the afternoon, with the boys and Mr Macmillan, going paintballing! The girls on the other hand went for a far more tranquil activity, by going to the Relaxing Zone in Haslemere for a pamper session, including manicures, facials and a foot spa! To end the evening, the pupils watched the heavily anticipated England vs Scotland Euro match!

Saturday 19th June brought the event everyone was looking forward to, and following an amazing effort from the staff and 5th Form pupils Azariah and Izabel, the Ball was ready! Themed ‘The Oscars’ the Selborne Room was taken over by a Hollywood theme, with black and gold decorations, movie posters and even a red carpet. After a quick photoshoot under the Arch, pupils made their way into their final evening all together. With great food from our Catering Team at Holyrode Howe and even better company, the 5th Form finally got to celebrate the end of their GCSEs together. A special evening enjoyed by all.

After the last boarders left on Sunday 20th June, for the first time in months both Elizabeth and Wakefield House were quiet. And after all their hard work, Miss Condy and Mr Macmillan finally got to put their feet up and enjoy a well deserved break! Thank you to Miss Condy, Mr Macmillian and Mr Campbell for all their work in organising this week and their support for the 5th Form during this difficult year. An additional thank you to all the staff who helped organised an event and volunteered their time to make sure the 5th Form got the send off they deserved.