Sixth Form pupils following the IB Diploma Programme have demonstrated their credentials, as knowledgeable, reflective, and principled learners, with excellent results and a 100% pass rate.

This year’s IB cohort of 43 pupils, have had to contend with significant disruption to their learning throughout the duration of their course. However, their resilience and determination, together with the school’s remote learning provision, has enabled them to complete their Diploma Programme with great success. As the results show, their hard work has paid off with an impressive 77% gaining 5s and above (equivalent to A*-C at A-level); this is all the more remarkable given that they have never sat public exams before. 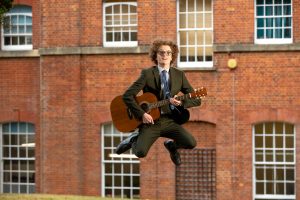 Whilst we are proud of all of the pupils, a few deserve special recognition. Local pupil Harry Naylor (pictured) is jumping for joy after achieving an impressive score of 40 points that secures him a place at Durham University to read Geography. His academic achievement is impressive, and even more so when seen in the context of him being an exemplary role model and outstanding composer and songwriter. 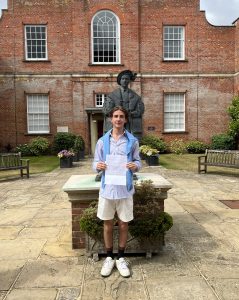 Also flying high is Pablo Von Baum Garcia, from Switzerland, who achieved the top score of 43 points and goes on to read Computer Science. As a Head of House and Prefect, he set the bar high for incisive and analytical thinking and enquiry. Head Girl Kokoro Windsor gained a high score of 37 points and will go on to the University of Exeter. Her academic accomplishment was gained amongst her many commitments as she carried out her ambassadorial and representative role – she is already highly skilled and well equipped to read Politics and Sociology.

The School’s charitable foundation continues to support a number of pupils across the school so we are particularly proud to celebrate their achievement. Norell secured his place at Kings College London to read Geography, having gained 34 points. Moreover, fellow foundation pupil Oluwatobi, from London, excelled with 37 points and hopes to go on to study Social Sciences.

Given the geopolitical situation in the Ukraine, a number of Ukrainian pupils should be applauded for managing to revise and sit exams against a backdrop of deep uncertainty. Ihor successfully completed the Diploma with a score of 33 points and goes on to read International Business at City University, and twins George (Heorhiy) and Darya both scored 31 points. 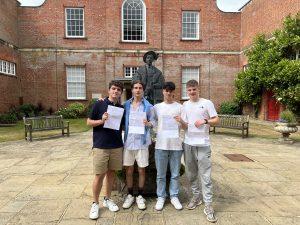 Mrs Joanna Wright, Head, says, “I would like to congratulate all our Upper Sixth Form IB pupils who have achieved excellent results. Having been through two years of considerable challenge, we are incredibly proud of our pupils who have persevered and been rewarded by well-deserved grades. Their achievement is made greater by the knowledge that they have met the challenges presented and the closer scrutiny of grades now that exams have been resumed.  Many of our pupils gained higher than the global average of 31.98/45.

Each statistic tells a story, and our pupils have succeeded in gaining good marks, as well as participating fully in so many areas of school life. This year group demonstrated leadership in character as well as in achievement. They are ambitious, selflessly so – well done.” 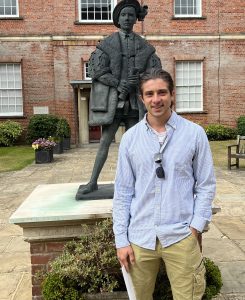 The International Baccalaureate programme alongside A-levels is run so pupils are free to choose either course or a combination of the two to best fit their interests and career trajectory. We are currently following a huge investment programme benefiting all pupils, but especially those progressing into the Sixth Form. In September, a bespoke Upper Sixth Form House will be unveiled, followed by a new library, café and central collaborative learning spaces due to open in October.

Sixth Form pupils following the IB Diploma Programme have demonstrated their credentials, as knowledgeable, reflective, and principled learners, with excellent results and a 100% pass rate. This year’s IB cohort of 43 pupils, have had to contend with significant disruption to their learning throughout the duration of their course. However, their resilience and determination, together...

Congratulations to our hard-working IB pupils whose dedication has paid off with an excellent set of #IBresults. Well done to the young men and women of #classof2022. We couldn't be prouder of you!Read more here: www.kesw.org/2022/07/07/ib-pupils-receive-outstanding-results/ ... See MoreSee Less